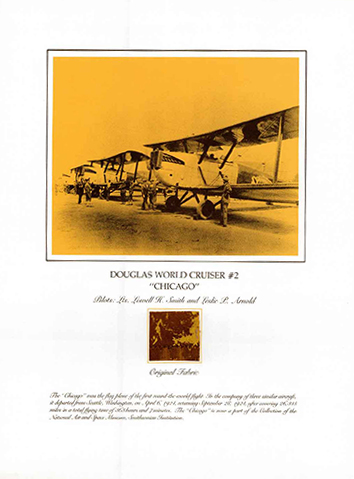 Flying through weather extremes, rough seas, angry Russians and towering icebergs, the “Chicago” was one of two Douglas World Cruisers to circumnavigate the globe.

The 1920s saw global interest in proving the reliability and potential of aircraft. One venture that captured everyone’s imagination was flying around the world. The first attempt, made by a British aircraft in 1922, ended with its crashing in India. The following year, teams from France, Italy, Portugal, Argentina, Britain and the U.S. were eagerly making plans for their own attempts. In 1924, they all took off in hopes of being the first to circle the globe. The race was on!

The four Douglas World Cruisers were named after U.S. cities – “Chicago” – “Boston” – “Seattle – and “New Orleans.” Because of Prohibition, the Army Air Service used bottles of water rather than champagne to christen their World Cruisers. The “Chicago” was baptized with a bottle of water from Lake Michigan – the Atlantic Ocean supplied water for the “Boston” – water from Lake Washington christened the “Seattle” – and the “New Orleans” was doused with water from the Gulf of Mexico.

They were both land and float planes, a new concept then, and were powered by a 420 horsepower V-12 Liberty engine. Each aircraft was crewed by two U.S. Army Air Service pilots. The four World Cruisers took off from Sand Point, Washington – near Seattle – in the early hours of April 6, 1924 and flew through weather extremes, rough seas, towering icebergs and unfriendly Russians on their globe-circling journey. It was the media event of 1924 with celebrities and dignitaries in countries along the way wanting to have their picture taken with the American aviators.

Before the flight began, the Army Air Service had set up 70 support stations in different countries along the route. At each way station was a crate with spare parts for en route repairs – plugs, magnetos, cables, pulleys, canvas, tubing – 480 separate items in all, including spare engines. Even the crates were meant to be used. They were were made of ash and spruce plywood, so the crews could use the wood to repair or replace any part of a damaged fuselage, pontoon or wing.

The World Cruiser “Chicago” was piloted by Lt. Lowell Smith and Lt. Leslie Arnold. With all the unexpected problems along the way, they had to be ready for anything. As Smith later recalled: “The icy hand of Failure tried to claw us down when our motor-driven fuel pump quit on us near Icy Tickle, Labrador. Five minutes later our wind-driven pump also gave out. Les then laid hold of the handle on the emergency pump and pumped it for dear life.” For the next 3 hours Les Arnold worked the wobble pump by hand without a break. When one arm went numb, he used the other hand to continue pumping until they reached safe harbor.

The first casualty was the World Cruiser “Seattle.” It crashed in dense fog on the upslope of an Alaskan mountaintop and was demolished. Major Martin and Sergeant Harvey escaped with only minor injuries, but they were stranded “10 days from nowhere.” Their only food supply was some hardtack and  a can of beef concentrate “which we consumed a teaspoonful at a time in a cup of water.” Both men suffered from snow blindness, lack of food and fatigue. “The little sleep we did get was an occasional short snooze while sitting in the snow.” After 7 days of hiking, they discovered a trapper’s cabin with no furniture but with a stove and a rifle, which they used to bag a few snowshoe rabbits. Three days later they set out again and after a 20 mile trek through snow and sub-zero temperatures, they spotted a radio mast in the distance with smoke coming from the chimney of a building – a fish cannery. News that they were safe was flashed to their worried families and the other World Cruiser crews. As Martin and Harvey later recalled: “The tragedy to us was that, as far as we two were concerned, the World Flight was over.”

Meanwhile, the three remaining World Cruisers were forced down due to bad weather and spent the night with an American fishing boat in a Russian harbor. Their hasty departure at dawn left a boatload of armed Russian marines in their wake. Next stop was Japan where the reception was just the opposite – formal receptions, teas and dinners. However, the crews were more interested in flying than being celebrated when told the British round-the-world team was not far behind and that the Italian, Portugese and Argentine aircraft were all en route.

The Cruisers made stops at Saigon – Rangoon – Calcutta – Baghdad – Budapest – Vienna – and Paris, where they circled the Eiffel Tower before landing and spending the night in the French capital. The American aviators were guests of honor at the Folies Bergere – but all 6 exhausted crew members fell asleep during a performance by the famed can-can dancers. Next stop was London where they were again celebrated with royal receptions and formal dinners. Next challenge – the Atlantic.

While over the Atlantic en route to Iceland, the “Boston” lost all oil pressure and the crew was forced to make a sea landing. Luckily, the “Chicago” saw this and went in search of a boat to help the downed aircraft. The “Chicago” crew found the U.S. cruiser “Richmond” and after three message bag drops, help was on the way. They rescued the crew and the “Boston” was taken in tow but, by nightfall, high seas broke up the aircraft and it sank in deep water. 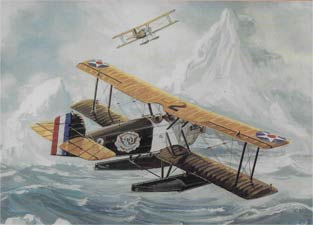 CLICK TO ENLARGE!“Chicago” and “New Orleans”
confront towering icebergThe two surviving World Cruisers, the “Chicago” and “New Orleans”, set out from Iceland on the longest leg of the trip – 820 miles. They flew over 30 foot swells under a 100 foot cloud base and a sea dotted with towering icebergs. At one point, flying side by side, an iceberg appeared directly in front of them. The “Chicago” banked one way and “New Orleans” the other – both aircraft were lost to each other. Although separated, they reunited in Greenland and, together again, continued on to Nova Scotia.

On September 28, 1924, a crowd of 50,000 greeted the weary crews at Sand Point, Washington – where it all began – 175 days earlier. After 72 stops in 26 countries, the Americans had won the race. We were the first to circumnavigate the world by air!

This 15″ x 20″ relic print pictures the four World Cruisers that started the flight and includes a 4-square inch swatch of the original wing fabric from the “Chicago” preserved by the Smithsonian during its restoration. Also included is a Certificate of Authenticity signed by the Deputy-Director of the National Air and Space Museum and 3 pages of colorful historical information on the flight along with aircraft specs. A wonderful story of the first flight around-the-world – and a true collectible for anyone who appreciates aviation history!

CLICK TO ENLARGE!
Want to send a gift for Christmas or other special occasion? We will ship directly to them and include a message from you.
Our supply of the Douglas World Cruiser relic prints is limited to the fabric preserved when the aircraft was restored by the Smithsonian Institution.

The 100th anniversary of this amazing flight will be celebrated in 2024. 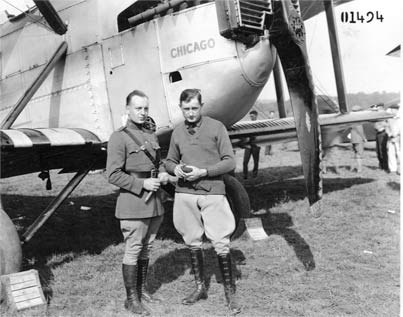 CLICK TO ENLARGE!Arnold and Smith with their aircraftSmith and Arnold were both lieutenants in the U.S. Army Air Service. Lowell Smith worked as a miner and tried to enlist in the military but was rejected due to his lack of a higher education. He persisted and was finally sworn in as a private in April, 1917 – received his pilot wings in October – and was commissioned a lieutenant in December! Lt. Smith held a total of 16 records for speed, endurance, and distance, flying military aircraft. In 1923, he flew the first aircraft to receive a mid-air refueling. The next day, he completed a flight that led to a new endurance record of 37 hours. Yet, the most impressive of his records was the around-the-world flight in 1924.

Leslie Arnold trained as a fighter pilot but didn’t reach the front in time to see combat in World War I. He traveled America as a military barnstormer, one of many pilots after the war who helped excite the public about aviation. Lt. Arnold was an alternate pilot for the World Flight, and joined Smith on the “Chicago” when the original pilot-mechanic became ill just days before the start of the flight. Save 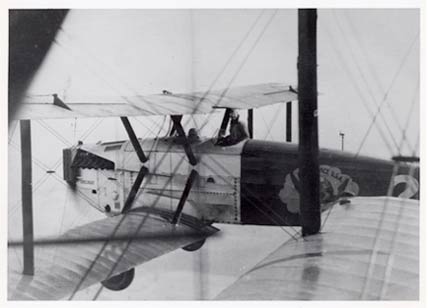 CLICK TO ENLARGE! Smith and Arnold aboard the “Chicago” in flight. The World Cruiser was an entirely new aircraft, designed and built by the Douglas Aircraft  Company – now owned by Boeing. Delivered at just $48,000 each, it was a lot of airplane for the money. The reliable 420 hp Liberty engine gave it a range of 1200 miles as a land plane, a ceiling of 10,000 feet and a top speed of 103 mph. Not impressive numbers for 1923, but they were built for endurance, not speed.

In long overwater flights, the pilot’s worst enemy was foul weather and a reliable engine his best friend. Since the Cruiser had an open-air cockpit, he experienced first-hand whatever the weather dished out. On the other hand, the cockpit was “roomy” and well equipped with instrumentation, as was the rear cockpit, so it could be flown by either pilot.

The V-12 Liberty engine used was put through grueling pre-flight tests and proved to be dependable, even though the “Chicago used six on its around-the-world flight. The Cruisers were both land and float planes fitted with Goodyear 36 x 8 tires mounted on wire wheels and floats constructed with three-ply mahogany, weighing 300 pounds each. The seaplane version tipped the scales at 5,180 pounds empty,` while the landplane Cruiser weighed in at 4,390 pounds. It was a big, heavy airplane designed to fly long distances and it did its job well. On its around-the-world flight, the “Chicago” covered the 27,533 miles with a flying time of 371 hours, while consuming 68,950 gallons of gas and 8,738 gallons of oil. Save