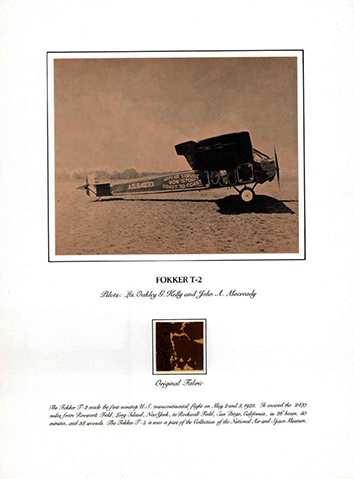 The Fokker T-2 flew non-stop from New York to San Diego, despite fog, mechanical problems and uncertain navigation through rainstorms.

The Fokker T-2 is now in the permanent collection of the Smithsonian and famous as the first to fly coast to coast – non-stop. Just 12 years earlier, the Wright Vin Fiz flew coast to coast – in 55 days with 70 landings in a dozen states!

It was an impressive aircraft with an 80 foot wingspan and built for the U.S. Army Air Service by the Netherlands Aircraft Company, founded by the Dutch aviation pioneer – Anthony Fokker. It was reconfigured for the long flight by adding extra fuel tanks in the wings and a second set of controls in the rear cabin.

Two Army Air Service lieutenants, Oakley Kelly and John Macready, made their first coast-to-coast attempt flying from west to east in an effort to take advantage of the prevailing westerly winds and higher octane gas in California. They took off from San Diego but fog in the mountain passes turned them back.

●We will ship directly to anyone on your list with a greeting from you.

On their second attempt, Kelly and Macready made it through the mountains and flew as far as the midwest when the water jacket on their Liberty V-12 engine developed a leak. With only one thing in mind, reaching New York, they began pouring everything they had into the radiator – coffee, drinking water and some beef consommé. Losing altitude and with no more fluids on board, they sighted and considered the Indianapolis Speedway for an emergency landing site but limped another 15 miles to the US Army’s Ft. Harrison.

While inflight, the lead pilot sat up front in an open cockpit right next to the engine with the leading edge of the wing as a headrest. It was grueling work because of the engine noise, slipstream, exhaust and heat. “Sitting next to that engine in the open cockpit was like sitting shoulder-to-shoulder with your best girl in a 2-seat roadster. Except instead of soft music playing on the radio, all we heard was that big V-12 Liberty engine belchin’ exhaust while it was spittin’ oil.” After having had enough and in need of relief, he yanked on the steering yoke to alert the other pilot who took over and flew blind with a secondary set of controls in the rear cabin. The pilot up front then removed his seat back and slithered through a narrow tunnel and switched places with his partner. Both were involved in navigating the aircraft and since there were no aeronautical charts available in 1923, they relied on Rand McNally road maps and “dead reckoning.”

On their third attempt they flew from east to west – Long Island to San Diego – and were so heavily loaded with fuel on takeoff, they just barely cleared trees and telephone lines. There was no radio intercom in the T-2 so when Kelly and Macready wanted to communicate while in flight, they did so with penciled notes passed over a belt-like, string-and-clothespin message carrier. After the risky Long Island takeoff, a penciled note Macready sent on the “intercom” to Kelly up front read, “I’ll bet the New Yorkers got a kick from that takeoff. You handled a tight situation and deserve a lot of credit.”

At one point during that third flight, Kelly shook the steering yoke signaling Macready to take over the controls and change places. As difficult as it was to fly virtually blind from the rear cabin with no line of sight, Macready managed to fly on for a half hour, wondering whatever happened to Kelly. Because the voltage regulator was discharging, they were flying on battery power alone, so Kelly had removed the regulator, repairing and then replacing it on the engine. Another in-flight emergency solved!

After flying almost 27 hours, part of it at night, through thunderstorms and fog with no rest – Kelly and Macready made it happen. They landed at Rockwell Field, San Diego on May 3, 1923. Elapsed time: 26 hours 50 minutes. Average ground speed for the 2470 miles was 92 mph. Their historic coast-to-coast flight carried them over the following states. New York – Pennsylvania – Ohio – Indiana – Illinois – Missouri – Kansas – Oklahoma – Texas – New Mexico – Arizona – and California.

The Fokker T-2 non-stop flight was a huge accomplishment for 1923 and showed that long distance air travel was indeed possible – helping to pave the way for commercial air carriers.

The 4-square inch swatch of original fabric included with this 15″ x 20″ relic print was preserved when the Smithsonian restored the Fokker T-2 before installing it in the permanent collection of the National Air and Space Museum where it can be seen today. Also included is a signed Certificate of Authenticity and 2 pages of colorful historical information on this aviation milestone along with aircraft specs. An extraordinary flight and an opportunity to own a piece of aviation history.

CLICK TO ENLARGE!
Proceeds from this website are funding Ceiling and Visibility Unlimited – a weekend aviation camp for at-risk kids.

Want to send a gift for Christmas or other special occasion? We will ship directly to them and include a message from you.
Our supply of the Fokker T-2 relic prints is limited to the fabric preserved when the aircraft was restored by the Smithsonian Institution.

The 100th anniversary of this extraordinary flight will be celebrated in 2023.

John Macready and Oakley Kelly were lieutenants in the U.S. Army Air Service, which would grow to be the Air Corps in 1926 and then the U.S. Air Force in 1947. Both Kelly and Macready were awarded the Distinguished Flying Cross after the flight. 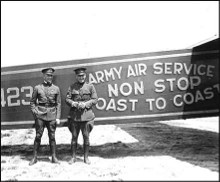 Kelly and Macready with Fokker-T-2CLICK TO ENLARGE!

Macready was an experienced pilot. He set a world altitude record of 40,800 feet in 1922, made the first crop dusting flights, took part in the first aerial survey of the United States and was the first to parachute from an aircraft at night. He was 35 at the time of the T-2 non-stop flight and went on to serve as a colonel in the U.S. Air Corps during World War II.

Kelly was 31 years old when they made their coast-to-coast flight in 1923. He served as an engineering test pilot in the Army Air Service and was key in modifying the T-2 for the flight. He also made the first in-flight aircraft engine repair in history, when he removed, dismantled and repaired the defective voltage regulator while the T-2 was airborne. A half-length portrait of Kelly now hangs in the Library of Congress in Washington, DC.

Both Kelly and Macready received congratulatory telegrams from President Harding and other dignitaries after landing in San Diego. A telegram from Anthony Fokker, founder of the Netherlands Aircraft Company, was prophetic. In it he said: “Your flight is a milestone – in ten years the route you flew will be covered by aerial passengers and freight service.”

The Fokker T-2 was powered by the reliable Liberty V-12 engine that was fitted with an 8-volt Delco ignition system. There were three fuel tanks on the T-2 – a 418 gallon and 130 gallon tank in the leading edge of the center wing section and a 185 gallon tank in the fuselage. At 6.3 pounds per gallon, the fuel alone weighed in at almost 5,000 pounds. The engine was filled with 35 gallons of Pennzoil special extra heavy duty oil and had a 40 gallon reserve oil tank onboard. The wheels were fitted with 44 x 10 Goodyear tires and the the 8 volt ignition system was made by Delco.

The wing chord – distance from leading edge to trailing edge – was 15 feet at the center section for a total of almost 1200 square feet. This incredible amount of wing surface allowed for a heavy payload and greater stability in flight. The fuselage of the T-2 was covered with Grade A cotton, impregnated with acetate dope and then coated with a protective paint.